State of Alaska Department of Revenue reduced its stake in shares of Group 1 Automotive, Inc. (NYSE:GPI – Get Rating) by 6.4% during the 1st quarter, Holdings Channel.com reports. The firm owned 11,992 shares of the company’s stock after selling 825 shares during the quarter. State of Alaska Department of Revenue’s holdings in Group 1 Automotive were worth $2,012,000 as of its most recent filing with the SEC.

Group 1 Automotive (NYSE:GPI – Get Rating) last issued its quarterly earnings results on Wednesday, April 27th. The company reported $10.81 earnings per share for the quarter, beating analysts’ consensus estimates of $9.45 by $1.36. The firm had revenue of $3.84 billion for the quarter, compared to analyst estimates of $3.77 billion. Group 1 Automotive had a net margin of 4.45% and a return on equity of 38.47%. Group 1 Automotive’s quarterly revenue was up 30.1% compared to the same quarter last year. During the same period last year, the company posted $5.57 EPS. On average, sell-side analysts predict that Group 1 Automotive, Inc. will post 41.89 EPS for the current fiscal year.

The business also recently declared a quarterly dividend, which was paid on Wednesday, June 15th. Investors of record on Wednesday, June 1st were paid a $0.37 dividend. The ex-dividend date was Tuesday, May 31st. This is a positive change from Group 1 Automotive’s previous quarterly dividend of $0.36. This represents a $1.48 dividend on an annualized basis and a yield of 0.86%. Group 1 Automotive’s dividend payout ratio (DPR) is currently 4.07%.

Group 1 Automotive, Inc, through its subsidiaries, operates in the automotive retail industry. The company sells new and used cars, light trucks, and vehicle parts, as well as service and insurance contracts; arranges related vehicle financing; and offers automotive maintenance and repair services. It operates primarily in 17 states in the United States; and 35 towns in the United Kingdom.

Want to see what other hedge funds are holding GPI? Visit HoldingsChannel.com to get the latest 13F filings and insider trades for Group 1 Automotive, Inc. (NYSE:GPI – Get Rating). 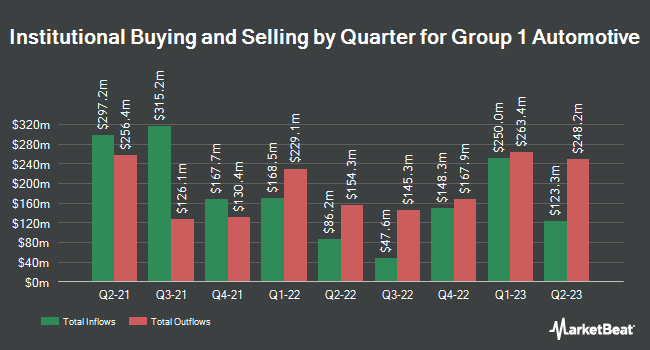